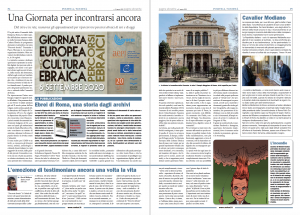 Rome, the oldest Jewish community in the Diaspora, Rome, is going to be the leading city of the 21st edition of the European Day of Jewish Culture scheduled for Sunday 6 September. The 2020 event will focus on the theme “Jewish journeys”.

Thirty-two European countries will take part in the initiative.

In Italy, events will be held in over 90 Italian cities and towns in 16 regions.

This year many of the events will be organized online: virtual itineraries in synagogues, museums and Jewish neighborhoods, performances, lectures and roundtables will allow participants to learn more about the life and traditions of a minority who has been in Italy for over 2,000 years, starting from the great historical and cultural heritage of the Community of Rome.

In order to cover Rome’s community long history it is necessary to look far back. The Jewish presence on the Tiber is in fact already attested in the 2nd before the Common Era, long before the destruction of the Temple of Jerusalem (70 CE) which originated the exile of the people of Israel known as the Diaspora. The first historically documented contacts date back to 161 BCE, the year in which the ambassadors sent by Judas Maccabee to the Senate stipulated a treaty of friendship and alliance between Rome and the Jewish people in revolt against the Seleucids.

The theme chosen for the 2020 edition is an open invitation to explore the Italian Jewish historical, artistic, archaeological and cultural itineraries, among the most fascinating in the world, from large to small communities to centers where there is no longer a structured Jewish presence, but where there are sites of great interest.

In this regard, Noemi Di Segni, UCEI President explained: “The upcoming EDJC will be different from all past editions. Due to the terrible health emergency that has overwhelmed the world, and which has seen Italy among the countries most dramatically affected, the initiative will have to take place in unprecedented ways, focusing heavily on new technologies, as also indicated by the AEPJ, the European association that acts as an umbrella organizer to this great event in which over thirty countries participate. AEPJ recommended to switch to a digital edition.”

The situation has entailed new limits but also an opportunity to experiment a different way of creating and enjoying culture, “pushing us to refine and implement new resources and new possibilities,” she added.

If this crisis had happened even only fifteen, twenty years ago, the UCEI President highlighted, “none of us could have made video calls and the absence of social networks would have forced us into even worse isolation, while shopping online would have been impossible.”

Despite the great difficulties, Di Segni emphasized the luck of living in a hyper-connected age. And therefore, she stated, also “the European Day of Jewish Culture keeps up with our times, marking a great virtual experiment, which in some cases can still take place where permitted, with the utmost rigor and respect for the regulations in person. We hope it will arise the interest of a wide audience this year as well.”

The challenge is to bring attention to a “lively and alive Judaism, which wishes to open up and make its contribution to society, and which we hope will represent a moment of joy and a light of hope for the whole country, in this difficult time. A moment that Italy,” concluded Di Segni, “is proving to be able to face with great strength, dignity and a sense of community”.

To explore the many topics that will be addressed in a few weeks, it is possible to visit the event website, redesigned to become more user-friendly, updated and rich in content, and therefore completely renewed.

The website thus offers the possibility to enjoy the opportunities offered by the Day even from far away: without leaving their own living room participants will be able to immerse themselves in sacred objects, materials, documents, galleries of pictures and interactive maps in several locations to be chosen with a clicks in the wide section of TV segments produced for the program Sorgente di Vita.

Moreover, live broadcasts, screenings and streaming events will also be held on social media, and especially on Facebook and Instagram.