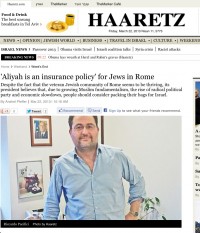 ‘Aliyah is an insurance policy’ for Jews in Rome

Despite the fact that the veteran Jewish community of Rome seems to be thriving, its president believes that, due to growing Muslim fundamentalism, the rise of radical political party and economic slowdown, people should consider packing their bags for Israel.
By Anshel Pfeffer | Mar.22, 2013 | 10:16 AM

ROME – As local landmarks go, the Great Synagogue of Rome, completed in 1904, is not a particularly ancient building. But littered throughout its prayer and study halls, and the local Jewish community offices on the two upper floors, are priceless pieces of furniture, religious objects and illuminated manuscripts salvaged from dozens of ornate Renaissance-era synagogues throughout Italy, some going back to medieval times. That doesn’t mean that the place is a mere museum, though there actually is a Jewish museum on the premises, as well.

Actually, the synagogue on the banks of the Tiber River is a vibrant Jewish center with three daily minyanim (prayer quorums ), hundreds of children coming for Hebrew school and bar-mitzvah lessons, and various committee meetings going on each day. Behind the synagogue wind the alleyways of the old Jewish ghetto, now a main tourist destination, with its kosher restaurants, and food and Judaica shops.

On the surface, the Jewish community of Rome – the oldest continuous Jewish community in the world and 15,000 strong today – is thriving, but its president, Riccardo Pacifici, says this is the moment that Italy’s Jews should “start preparing slowly to move to Israel.”

Pacifici, 49, denies he is being alarmist. So why is it necessary to consider such a move? He makes a waving motion with his hand: “The graph goes up and down and I think that the best is finished. Now we have a good moment – There is respect of the population for the Jews, there are laws against anti-Semitism, it is not easy to talk against the Jews today in Europe. So now it is important to make the decision in a good moment.”

How long will this moment last? Pacifici says he is certain that “in 10 or 20 years, the demographics will have changed in Europe. The character of the Continent, which is Judeo-Christian, will have changed.”

Meanwhile, an evil wind of immigrant-hatred is sweeping Europe, and Pacifici is adamant that his community not join the xenophobic chorus. “As Jews,” he insists, “because of our historic memory, we must support the integration of immigrants into Italy and into all Europe, and the human rights of people who were born in countries where they did not have a chance or any hope to emigrate here. We have to do everything to support these people. But their sentiment is not positive toward Jews and Christians.”

Pacifici sees the combination of increased immigration, rising racism and fascism, and the deep recession in which Italy and other European nations find themselves to be part of an inexorable process.

“Of course, not all the immigrants are Muslim and not all the Muslims are fundamentalist,” he says. “But when they come here looking for a future and for work, they become disillusioned very quickly because, with the financial situation as it is, there are no jobs. And then they become very vulnerable to fundamentalism.”

While the demographics of the growing Muslim population in Europe have long been a worry for some Jewish leaders, others claim that only a tiny minority of Muslim immigrants are interested in anything but building new lives for their families. For his part, Pacifici sees the newcomers as a threat only when they join forces with local elements: “Muslim fundamentalism joins in with the racists and the fascists and the anarchists we have here, who don’t like Jews and don’t like Israel. They are unwilling to accept the fact that you can be both an Italian Jew and support Israel at the same time.”

Meanwhile, there is an even more immediate challenge to Italian Jews’ peace of mind: the rise of the Five Star Movement, the new and rather anarchic party that captured around one-quarter of the votes in last month’s general election in Italy. The party is headed by stand-up comedian Giuseppe “Beppe” Grillo, a man who has made anti-Semitic comments in the past and is exhibiting worrisome fascist tendencies.

“Some people think Grillo is just a clown,” Pacifici explains. “In Germany, they say he is just like [former Italian Prime Minister Silvio] Berlusconi. But Grillo says that political parties are not important, and that is exactly what Hitler was saying before he came to power. Grillo’s party is more dangerous than the fascists because they have no clear platform – we do not know what their limits are. We don’t know most [of the] people who are in the movement, but we do know that there are extremists from both left and right there − fascists and radicals − and they are together against the constitution, together against democracy.”

What worries Pacifici is that the political establishment in Italy has not ostracized Grillo and his like-minded colleagues. A few weeks ago, the party’s parliamentary leader, Roberta Lombardi, said that some elements of the ideology of Italy’s pre-World War II fascism were positive.

“When Berlusconi said something similar a few months ago, everyone criticized him,” recalls Pacifici, who believes that Berlusconi was the best leader in terms of the interests of the local Jewish community, and Italy’s ties with Israel. “But when Lombardi said [what she said], only one member of parliament [who happens to be Jewish] criticized her. The Democratic Party [Italy’s main left-wing party] were afraid to criticize because they want Grillo to support them in government. If our historic friends in the Italian parliament do not object when they hear people talking about fascism, then it flashes a red light.”

Until now, local Jewish leaders ‏(and Israel’s Foreign Ministry‏) have refrained from openly criticizing Grillo and his views, preferring not to make them a political issue or to alienate his millions of voters. But Pacifici believes that this silence has to end. He does not believe that 25 percent of all Italians are anti-Semitic.

Pacifici: “Ninety-five percent of Five Star voters do not share Grillo’s views on Jews and Israel, but they voted for him because they wanted change. Even my police bodyguard voted for them and this is someone who lives with me and my family, and I know he has nothing against us, but he wants change like everyone else.”
The communal leader has little doubt that his fellow Jews should move to Israel, rather than to somewhere anywhere else in Continental Europe, where similar dynamics are evident.

“For us aliyah is an insurance policy,” says Pacifici. “A lot of our people find that there is a better life for their families there, that Israel is our future. In the last six months alone, 150 Roman Jews moved to Israel. This is up from last year, when only 120 emigrated in the whole year. And we are shrinking demographically anyway, with more Jews dying each year in Italy than being born.”

But despite the various challenges and demographic trends, not all Italian Jewish leaders agree with Pacifici’s dire predictions and call to leave.
“People don’t understand this in my community. In 1938 in Italy, when they passed racist laws, they also didn’t want to understand. But we have to realize that if people in Italy do not have money and jobs, they will not want to have democracy either,” Pacifici explains. “That is why 25 percent voted for Five Stars. I have a responsibility to tell my community that they have to start slowly preparing. I said this for the first time last year after the murders of Jews in Toulouse” ‏(a reference to the killing of three children and a teacher at a Jewish school there‏).

Still, at the same time, Pacifici and the rest of the community’s leadership, is working on securing the Jews’ future in Italy, should they decide to stay. This includes a drive to boost Rome’s Jewish school, which has over 1,000 students, and local youth organizations. The community is also formulating a plan to engage with at least some of the newly elected members of the new Five Stars Movement.

“We are now starting a political project to study this party,” he says, “to understand who its members are and which of them we can deal with.”
One encouraging recent development, he notes, was the election of Pope Francis in the Vatican last week. The leaders of Rome’s Jewish community have already heard of the very favorable impressions of the former Archbishop Jorge Bergoglio from their counterparts in Buenos Aires.

“The Rome [Jewish] community was the last in Europe [that was] forced to live in a ghetto, until 1870,” Pacifici sums up. “For many centuries, we had very bad relations with the Vatican, but now we have good cooperation, and we work together to help integrate immigrants. Only by working together can we keep the Jewish-Christian identity of Europe.” 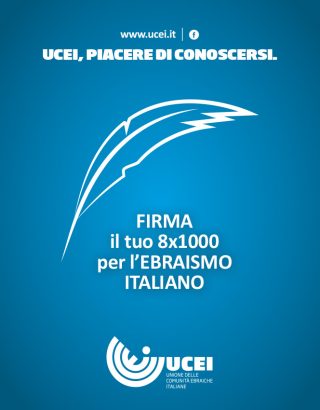 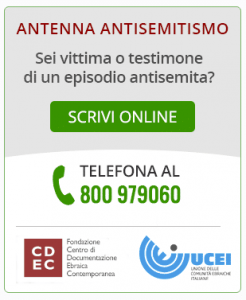